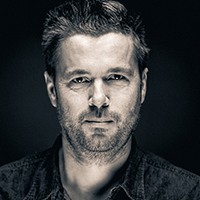 Turns any brief into a memorable idea.

Michel Jongeneel is a Dutch born senior art director. Cross-media is his middle name, although he takes a special interest in the digital side of life. Online campaigns, UX-design, UI-design and other stuff that literally fits in his smartphone, really gets him going.   Michel has been working 22 years in the advertising industry. At first as an art director for renowned advertising agencies such as OgilvyOne, TBWA\Direct Company and DDB Rapp Collins.

And later on as a freelance art director for lots of different advertising agencies throughout the Netherlands as well as for clients directly, such as Robeco, KLM and Achmea. His work has been nominated and awarded by national award shows.   Besides an award-winning art director, Michel is also a stand-up guy with a hands-on mentality. He is one of those rare art directors that doesn’t rest until the problem is solved the best possible way.

If you need a memorable, campaign-able idea that easily travels on- and offline, give Michel a call;

Or sent him a mail:

IN NEED OF A CREATIVE TEAM?

Michel regularly teams up with talented copywriters and concept developers for different brands and businesses. Copywriters he prefers to work with include: